Back to Newsletters & Updates
Share this article
Class Update

It was lovely to welcome all the children back to school after the break. They all had lots of tales about the things they had got up to in the week off.

Monday morning began with a session where the children were able to listen to one another’s news and then have a go sharing their news to the class.

Our topic this term is still about inventors and inventions and the tinkering lab has been used extensively to create weird and wonderful inventions of all shapes and sizes. We have begun looking at the story “Iggy Peck Architect”. This is a story about a boy who creates wonderful structures out of the things he finds around him. This story is by the same author of “Rosie Revere Engineer” and she actually appears in the illustrations of the book. This was spotted by the eagle eyed children!

The play dough table has been very popular this week! On Monday the children and Mrs Daly made up a fresh batch of dough and used some sparkly paint to colour the dough. The children have been making some fabulous creatures and people using stencils and printers as well as free hand creations, including an amazing crocodile!

During the early part of the week the weather was good and the children have been doing lots of outside learning and role play. The Garden Centre has been open for business and the children have been planting and selling plants and repotting using compost. The dressing up box has been used a lot this week with a whole set of characters including police officers and Spanish dancers have been seen in the outdoor area.

In PE this week Miss Pilgrim took the children outside and we have begun training in athletics for our annual sports day in July. The children were involved in some throwing and catching events working on the skills of aiming and accuracy when throwing.

In Maths this week the class have been learning to use a number line. Initially we used them for counting forwards and backwards then we progressed onto adding using the lines. This was a new skill for the children to grasp and initially it was quite tricky. Lots more practise will be coming next week!

Friday was Pyjamarama Day. This is a national initiative run by The Book Trust to encourage families to share stories and books together particularly at bedtime. Everyone came to school in their pyjamas bringing a donation for the charity. Sadly it was torrential rain but that did not deter the children who came in to class in a wonderful array of Jim jams and dressing gowns. During the morning the children completed some pyjama day activities and we all shared some stories during the day. What a wonderful way to finish the week!

Another busy week in Reception. This week was Healthy Eating Week so a lot of what we did was based around this theme. We began listening to the story “Carrot Club” and this was followed up by cooking. We made carrot muffins which were delicious. We spent a lot of time looking at what I healthy food and also what is unhealthy food and discussing with the children how they can make healthy choices. One of the activities involved cutting, sticking and sorting healthy and unhealthy food.

On Thursday afternoon the parents were invited in to work with their child to make a healthy lunch box. This was a fun and informative session for everyone!

We have had lots of healthy snacks this week as normal but on Friday we had a special snack. The children created fruit kebabs. There was a choice of different fruits including, mango, watermelon, banana, apples and strawberries. The children chopped and peeled the fruit and constructed the kebabs themselves and then of course ate them!

Welly walk happened as usual on Wednesday – it was damp but thankfully not raining too heavily! There were lots of puddles to jump in! We were able to see the geese and swans and baby ducklings. We also found a frog!

Maths this week continued with the use of number lines counting back and subtraction. We listened to the story of “Oliver’s Vegetables” and Revisited “Iggy Peck Architect”.

The children discussed what an architect does. We looked at a range of famous buildings around the world and discussed their designs and how the architects created their visions. The children then did some writing about what they would design and create if they were an architect.

Effort cup this week went to Eleanor and Patch went home with Lily to share her birthday celebrations. We can’t wait to hear about their adventures!

On Monday we began the week by continuing the theme of Healthy Eating. We had watermelon left over from the fruit kebabs we had made the previous week. The children chopped it all and we used a juicer to make the juice. The children enjoyed drinking it at snack time.

The theme for this week across the school was Science. Every afternoon the children were involved in practical Science activities. The activities took place in different areas with different teachers. The children earned stickers to place in a Science passport for each activity they completed. Reception children began the week with Mrs Ambrose. They were doing a nature activity. They discussed the colours of the rainbow and each child was given a rainbow card with rainbow colours on it. They then went out into the local environment to find natural items to match each colour. Some colours were easier than others! Green and yellow were easy! Blue was harder.

Mrs Keen ran an experiment where the children had to find the best material to make tea bags. They explored lots of different fabrics testing to see which would let the tea infuse best.

Mrs Sykes ran an experiment to see whose shoes had the best grip on its sole. They used a ramp and explored different surfaces and different people’s shoes to see whose were the grippiest.

Mrs Sahota ran an experiment to find what material would be the best to use to make a handkerchief. Different materials were tested for absorbency, softness and strength. The children were involved in; testing using scientific equipment, predicting, recording and making conclusions from the results they observed.

Greendown Playgroup children, some of whom will be joining Tregoze in September, came in to visit for an afternoon. They joined the current children and played inside and out and began to familiarise themselves with the staff and surroundings.

Monday was a very exciting day in Reception. It was class swap over day. All the classes spent the day with the new teachers they will be having in September. So all of Reception class went over to year 1. They have a new teacher to the school. Her name is Mrs Davies. She spent the day getting to know the children and they got to know her too. They discussed how things would be in Year 1 and what rules and expectations Mrs Davies would have of them. They all had a very productive and enjoyable day.

As the weather has improved this week and the sun has been shining we made the most of the outdoor learning area. We got out and planted peas and beans and we have been busy in the mud kitchen making mud pies! The Garden Centre Role play has been very busy with children potting plants and digging and sowing and using the tills to sell plants.

On Wednesday the children were working on the Arts Festival Project. The theme this year is Music Festival. They have made some fabulous festival bracelets using pipe cleaners and beads to sell at the Festival.

The Effort cup this week went to Leoti. Patch went home with Rhea. We look forward to hearing about their adventures together. 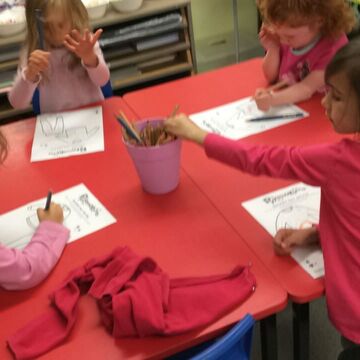 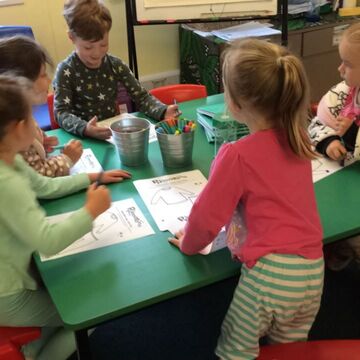 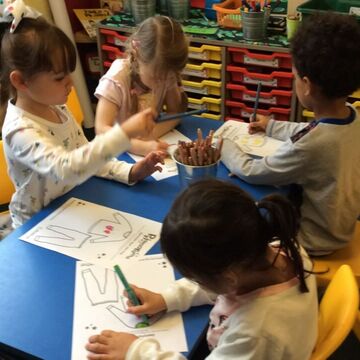 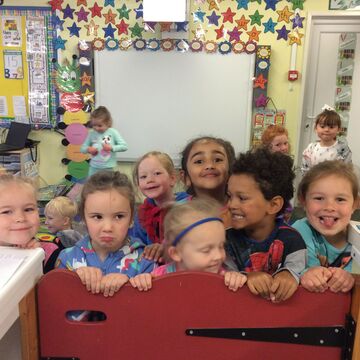 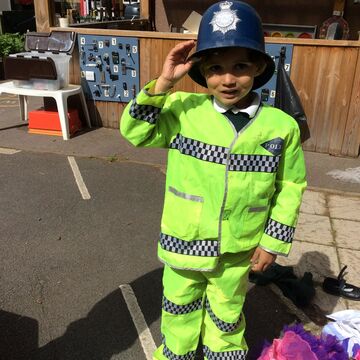 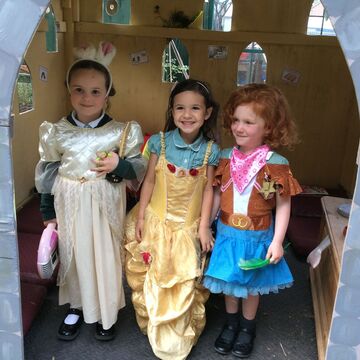 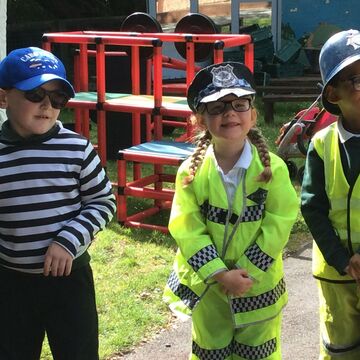 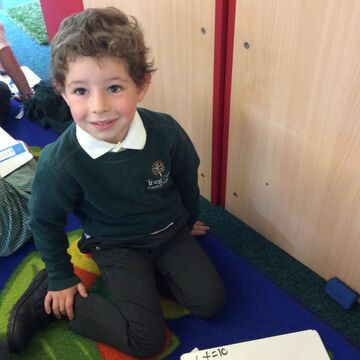 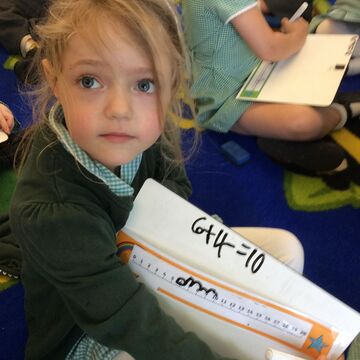 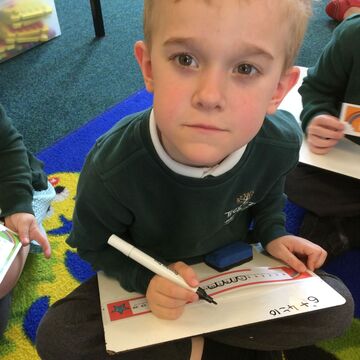 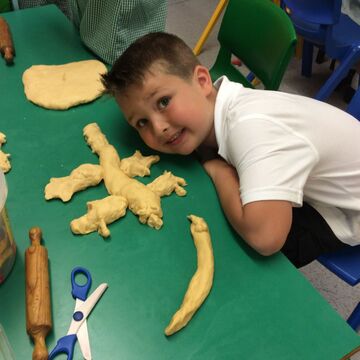 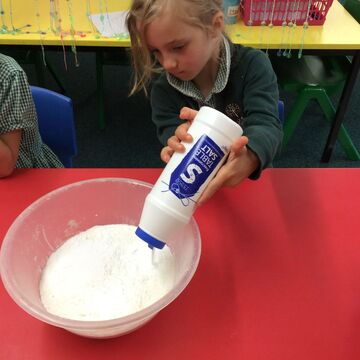 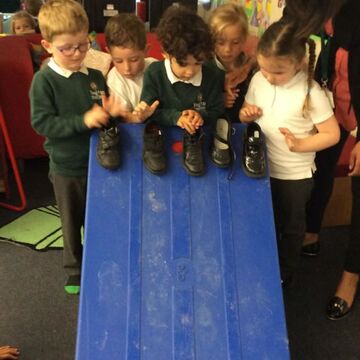 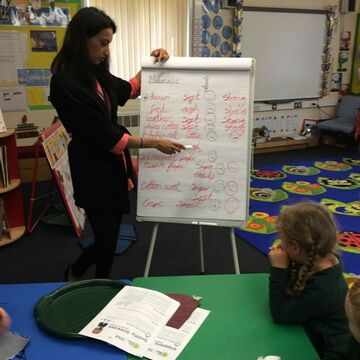 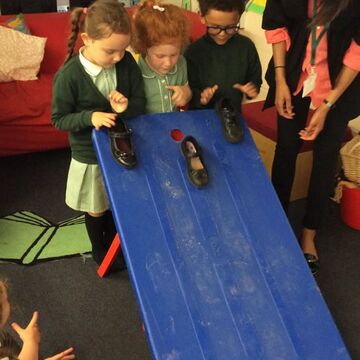 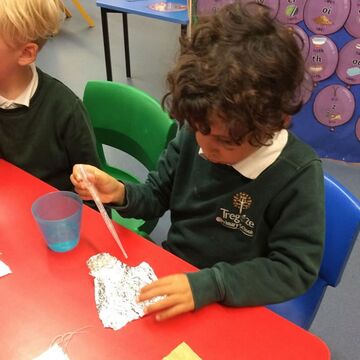 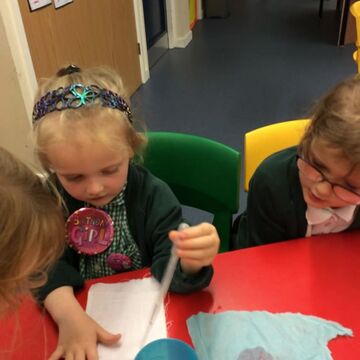 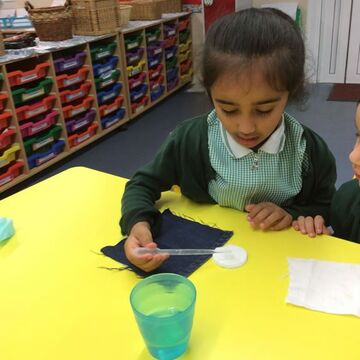 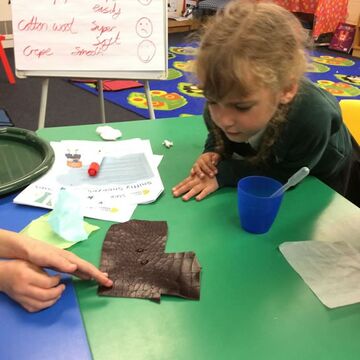 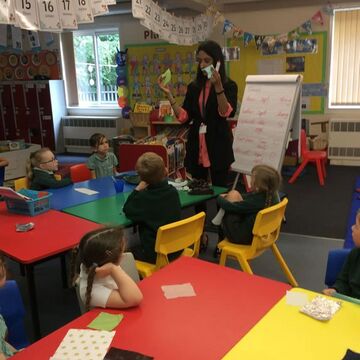 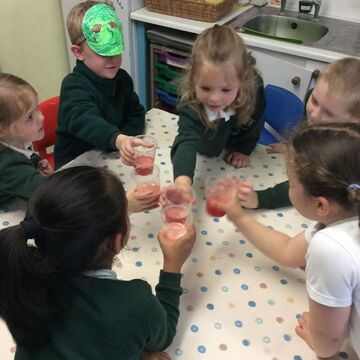 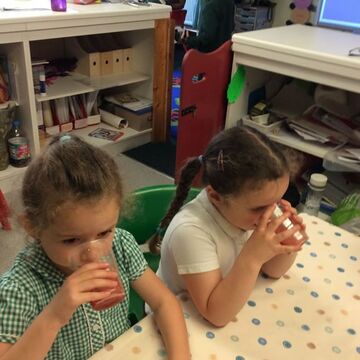 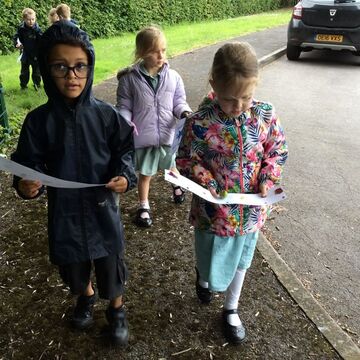 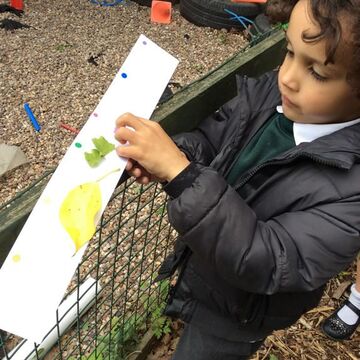 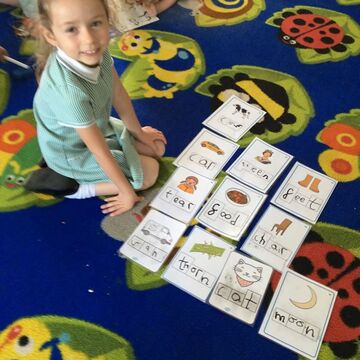 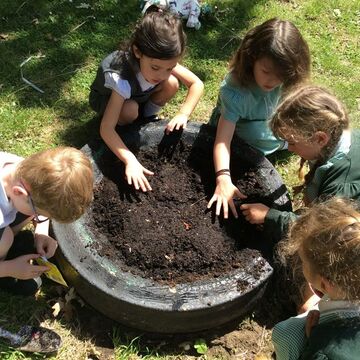 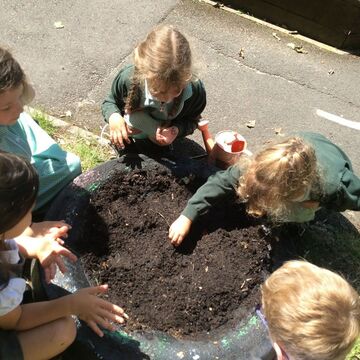 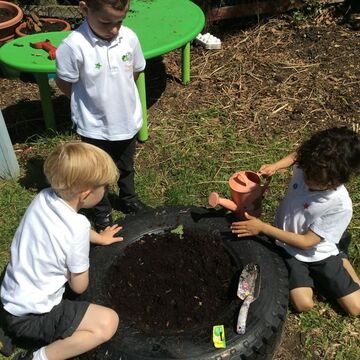 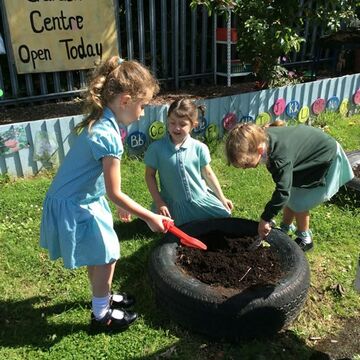